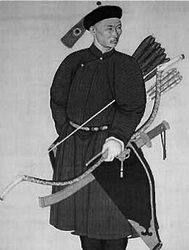 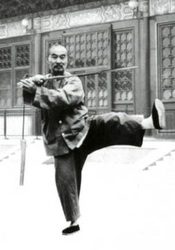 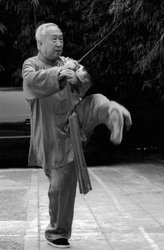 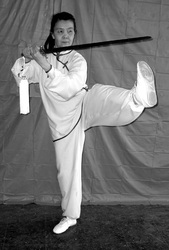 Traditionally, we start to learn Tai Ji Weapons after learning and practicing Tai Ji Quan hand form. One of the common weapons in Northern Wu Style Tai Ji Quan system is the Sword – a double-edged Chinese Sword. There are certain ways to use the sword technically, and there are 13 basic fundamental techniques need to be leaned at the beginning of practice.  These basic sword techniques are within every single movement of the sword form - sometime, there is a single teachnique in one posture, and sometime, there are combination of the techniques in one posture.  All these practical sword skills will be described in next paragraph.   First, keep in mind, all the principles of studying Tai Ji Quan will be applied to Tai Ji Sword practice!

Through many hours of solo practice, you will feel comfortable with the sword than before, and your body and mind have a deeper connection with the sword. Meanwhile, you will do well the form, that contends every technique and conditioning training which is needed to further your Tai Ji Quan training, especially, the weapon itself and footwork in Tai Ji Sword is an adding-on to the practice in order to develop the real skills.         Through many hours of partner practice, you will experience both offense and defense techniques of the sword. For instance, one person does the attacking, and another person defending him, both using one technique at a time is a way to learn about focus and positioning and practice one specific technique properly. At the very beginning, it is a set-up practice for both offense and defense, eventually it will be beneficial to your over all techniques because the skills have been practiced slowly, precisely, and carefully examined. Later on, more combination of the sword technique will be practiced through partners; speed, timing, and situation controlling will be the main focused.  Again, if you never do free sword sparring, you probably never obtain the ability of the sword fighting, you only have a great learning experience.