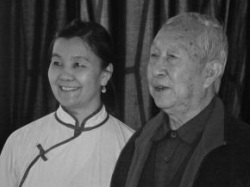 Northern China gave birth to many styles of martial arts, most notably the internal martial arts of Tai Ji Quan, Ba Gua Zhang and Xing Yi Quan. These arts were invented and developed in North China. Many martial artists were trained, gathered, challenged, and exchanged skills in the northern part of China. Especially in 北京 Beijing, where the royal family hired the most famous martial artists to guard and train the officials in the palace.

Northern Wu style Tai Ji Quan history is a part of the history of Tai Ji Quan that originated with members of the Chen family. The Chen's lived in Chen Family Village, Chenjiagou for generations in Henna Province. Chen Wan Ting invented this boxing style with softness, circularity, and internal force. They kept their boxing within the family until the time of 陈长兴 Chen Chang Xing (1771-1853), who accepted 杨 露 禅 Yang Lu Chan as a student. The Chen family kept a low profile and practiced inside of the village until Chen Fa Ke began to teach in Beijing in 1928.

Yang Lu Chan 杨 露 禅(1799-1872) was from Yongnian County, in Hebei Province. He went to Chen Village in search of livelihood. He learned Chen Style Tai Ji Quan from Chen Chang Xing. After his returning to his hometown, Yang passed the art on and was eventually appointed martial arts instructor to the imperial banner battalion in 北京 Beijing， the capital. He revised the original Chen family form, making it gentler in order to be able to popularize and teach it to more people and founded the remarkable 杨Yang Style Tai Ji Quan.

Northern Wu Style Master Wang Mao Zhai was a very famous fighter and considered the best in Beijing at the time. He became famous on the strength of his fighting skill and was widely respected within the community but totally unknown to the outside world until Mayor Yuan Liang became his student. When Yang Cheng Fu opened the door to the public, he became the most prolific Tai Ji Quan teacher in history and led the way for other public instructors of the art. Yang Cheng Fu, Chen Fa Ke, Wu Jian Quan and Wang Mao Zhai were the leading public Tai Ji Quan masters of their time in Beijing, China.  Northern Wu Style Tai Ji Quan has practiced by so many martial artists or people who love to be healthy - a famous "Longevity Tai Ji" (style) in China!

The founder, 全佑，Wu Quan You

Great Grandmaster Wu Chuan You (1834-1902) was the founder of Wu Style Tai Ji Quan and was born in Da Xing County, Beijing. He was a Manchurian and a member of the Imperial Guard in Beijing. He learned Tai Ji Quan from the founder of Yang Style, Master Yang Lu-Chan. Chuan You‘s area of specialization was neutralization. He also studied with Yang Lu Chan’s son, Yang Ban Hou. Through decades of training, he became a very well-known master who had the true skills of Yang family Tai Ji Quan. Based on the principles of Tai Ji Quan and the influence of studying with Ban Hou, he founded his own style of the art – The Wu Style.

There is no photo of Quan You but drawing of a Manchurian Imperial Guards looked samilar in the nineteen century or late Qing Dynasty. Quan You was one of the very best martial artists of his time, specialized in short weapons, exceptionally skilled in Sword (That's how this fantastic Northern Wu Style Tai Ji Quan 64 postures Sword form originally created). He had the characteristics of softness in appearance and strength on the inside and he loved to help people in their time of need. Legendary stories that have been passed down from earlier generations tell us that Quan You had both high skills of martial ability and the virtue true of martial art. He was a generous man with moral concepts melded into his skills. He never used his strength against weak people, but instead always showed his kindness to others. Quan You is known to have punished those who were evil and had done injustice to others, and a brave man who was always ready to help the needy.

One day, Quan You walked to the farmer’s market where he saw a soldier take food from a vendor and then not want to pay the merchant. When the vendor asked the soldier to pay him, the soldier started to beat the small man. Quan You came to stop the soldier, but the soldier thought Quan You looked too gentle to know how to fight, so he threw a punch and followed with a kick to Quan You. The soldier suddenly found that he himself was like a praying mantis trying to knock down a tree and he fell down to the ground without Quan You having moved an inch. Quan You told the soldier that one never should use his martial skills to mistreat innocent people.

In Quan You’s time martial artists often challenged each other with or without a notice. Among these men due to its softness the Wu Style was often mistaken as a weak martial art. One afternoon, Quan You was reading in his room when he was informed that an unknown guest had come to him. Quan You came to the courtyard to greet the man. The guest lowered his body as if to bow to Quan You, and Quan You returned the salute, but at that moment, the guest was suddenly up in the air, falling backward and landing outside the guest room’s door. All the people in the room were shocked by this surprise exit, but the truth was that the guest had used a martial technique known as “the steel fist” to attack Quan You’s belly when he was pretending a bow to Quan You. Quan You had in turn used the Tai Ji Quan skills of neutralizing and redirecting power from the guest to efficiently combine defense and offense.

Quan You had three primary disciples : He's son Wu Jian Quan ( 1870-1942 ), Wang Mao Zhai ( 1862-1940 ) and Guo-Fen.  Wu Style Ji Quan developed into two branches in Beijing, one from earlier students of Chaun You, and the other from students of Wu Jian Quan. Wu Jian Quan modified the forms taught to him by his father. He utilized a narrower circle and created many new ways to apply the form in a practical manner. In 1924, Master Wu Jian Quan, along with colleagues, Xi Yu Sheng, Yang ShaoHou and Yang Cheng Fu, founded a famous martial arts school. This had an important effect in the practice of Tai Ji Quan as it became available to the general public for the first time. 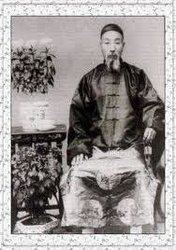 It is said that 王茂斋 Wang Mao Zhai (1862 - 1940), who was already a highly skilled martial artist in Beijing, pursued Quan You for three years in an effort to learn Tai Ji Quan. During this time, he reportedly learned only one posture from Quan You, the Golden Rooster Stands on One Leg. Impressed by his sincerity and perseverance, Quan You then taught him the rest of the Wu style of Tai Ji Quan. After twenty years practice, Wang Mao Zhai has achieved high skill in the art, and taught many dedicated martical artists in Beijing. At that time, 南吴北王 "Southern Wu (Jian Quan) and Northern Wang (Mao Zhai)" - "Nan Wu Bei Wang", 南吴北王 in Chinese。北平太庙太极拳协会 Beijing Tai Ji Quan Association was established in 1928 - a home of martial artists! In late 1920's and 1930's, 40's, Wang Mao Zhai and Wu Jian Quan were the two most influenced Masters who specialized in Tai Ji Quan art in China. 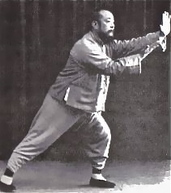 Master 吴 监 泉 Wu Jian Quan (1870 - 1942) moved south to Shanghai in 1928, for the first time in the history, the Wu Tai Ji Quan traveled from the North of China to the South of China - there he was appointed to the Board of Directors of the Shanghai Martial Arts Association. Subsequently, he became the supervisor of the Tai Ji Quan section of the famous Jing  Wu Association. In 1935, he established the first Wu's Tai Ji Quan Academy in Shanghai. This is how this style has been primarily transmitted from Beijing, Shanghai and Hong Kong. Wu Jian Quan’s daughter, Wu Ying Hua (1906-1996) and her husband Ma Yue Liang (1901-1998) lead the Shanghai Jian Quan Tai Ji Society founded in 1932 by Wu Jian Quan.  Wu Jian Quan's two sons, Wu Gong Yi and Wu Gong Zao established another branch of Wu style Tai Ji Quan in Hong Kong which led to the spread of the system throughout other areas. 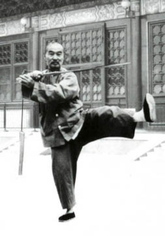 Master 杨禹亭 Yang Yu Ting (1887-1982) is Wang Mao Zhai's primary disciple, the third generation lineage Master of Northern Wu Style Tai Ji Quan. He was another one of those had started training in different kinds of style martial arts since age of 9 starting with 弹腿Tan Tui, 少林拳 Shao Lin Quan, 黑虎拳 Hei Hu Quan, 六合拳 Six Harmony Quan, 形意拳 Xing Yi Quan, 八卦掌 Ba Gua Zhang, and grow into a very famous fighter!  He was a highly well-respected and active teacher in Beijing throughout his life. He had a superior understanding of the internal aspects of Quan You’s teaching  which he acquired through studying the arts with Wang Mao Zhao. He held the vice-chairmanship of the Beijing Martial Arts Association at the time of his death at age 96. Yang Yu Ting is noted for his emphasis on the standardization of postures and for his popularity as a teacher who passed his art on to many students in Beijing, including Wang Pei Sheng, Li Jing Wu and Li Bing Ci.  Yang Yu Ting also highly respected by different styles of martial art practitioners.

He was the Master who "Smoked, but knew how to nap"! 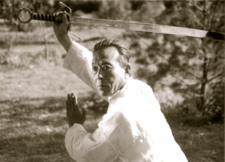 Master 王培生 Wang Pei Sheng (1919-2004), a very accomplished highly skilled martial art master, studied with Yang Yu Ting for a long time.  Wang was noted for his expertise in the self-defense applications of Wu style Tai Ji Quan.  He was a victor who fought against Japanese challenger in 1950's  In his book Wu Style Tai Ji Quan ( Zhaohua Publishing House, Beijing, 1983 ), Wang Pei Sheng presented the 37 posture form of Wu style Tai Ji Quan which he developed in the early 1950's. He had many students in Beijing.

(As mentioned previously, Quan You, who was the originator of Wu style Tai Ji Quan had another highly skilled disciple named Guo Fen.  Little is known about this man other than that he passed his art down to Guo Hong Jun and Li Wen Qi). 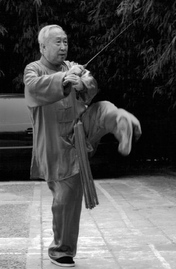 I couldn't be more pleased to study under Master Li Bing Ci, and honored to carry on and share with the world of the art of Tai Ji Quan as he taught.